The 5th China International Import Expo (CIIE) will be held on 5 November 2022 in Shanghai, China. Holding the Expo is a major opening-up measure planned, proposed, deployed, and promoted by the President of China, A pragmatic action for China to promote economic globalization, and practice the concept of a community with a shared future for humankind. This Expo continues to adhere to the theme of "New Era, Shared Future", and the online "Digital Expo" and the offline "Physical Expo" are held at the same time.

The world's leading • fully intelligent • COFE robot fresh ground café has been invited to participate in this global exhibition for four consecutive years. As the "Influencer" of the Expo, this exhibition COFE+ carried 3 of the latest version of coffee robots to fully demonstrate the era of "unmanned café" to the world.

Shanghai Hi-Dolphin Robot Technology Co., Ltd. is the world's high-tech leader, and manufacturing and operating of "COFE+ fully intelligent robot Cafe". 70 domestic and foreign patents are in the leading position. After the birth of product. National leaders, provincial and ministerial leaders, and a number of experts and celebrities visited the inspection and guidance, and were specially invited to the location by the National People's Congress and the Chinese People's Political Consultative Conference to show the deputies and members, 0 distance artificial intelligence into life, and has been widely reported by Xinhua News Agency, People's Daily, CCTV, and International famous medias.

Only a few countries in the world have been able to develop robot coffee. As the world's leading fully intelligent robot coffee, COFE+ can 100% replicate the craftsmanship of a professional barista, and the cups are fresh ground and the taste is comparable to that of internationally famous coffee brand chains. This is the world's leading coffee robot whose taste has caught up with a human professional barista, which can be described as a historic breakthrough in the coffee industry.

COFE covers an area of less than 2.5 square meters but can provide two kinds of coffee beans, two cup types, and three options of cold/hot/iced, selecting the concentration/temperature/sweetness/ice amount/grammage, not only fresh ground coffee, but also more than 50 flavors of Western-style milk tea, Japanese-style matcha, chocolate beverage, and an average of 50 seconds can make 1 cup. It is fully enclosed for sterilization and dust proof, fully intelligent disinfection and cleaning, fully automatic production, 24/7, one replenishment can continuously make 300 cups of 16-ounce large cups of drinks, only 30 minutes a day to maintain and replenish, one employee can manage 10 robot coffee kiosks, which can be described as a new species in the new economy!

COFE+ robot cafe, the flagship product of hi-Dolphin, has been strictly inspected and evaluated by the food safety expert group of the Chinese Market Supervision Bureau for one year and has become the first batch of robot cafe in China to obtain the business license of fresh food for sale. At the prototype stage, it has begun to be exported to Europe, America, Japan, and South Korea. At present, COFE robot coffee kiosks have begun to be located in Shanghai, Such as government office buildings, hospitals, universities, airports, shopping centers, etc., "24/7 café", "popular cafes in the next decades", "champion quality, fair price", received good reviews by consumers.

At this conference, the COFE+ fresh ground coffee robot showed the latest version of products, with many highlights:

It is reported that the fifth CIIE "Digital CIIE (2022-Technical Equipment)" has also started trial operation, and will take the lead in the technical equipment exhibition area of the enterprise business exhibition, resonating with the offline exhibition at the same frequency.

This year, a total of 66 countries and 3 international organizations participated in the online national exhibition. Robot coffee cofe+ attracted global attention again at this conference.

COFE+ fully intelligent robot fresh ground cafe is opening a new era of unmanned cafes around the world, and the fifth wave of change in the coffee industry has arrived. In the next decades, robots will work for humans for free, and robot coffee baristas will serve human beings, which is no longer a dream, but is becoming a reality! 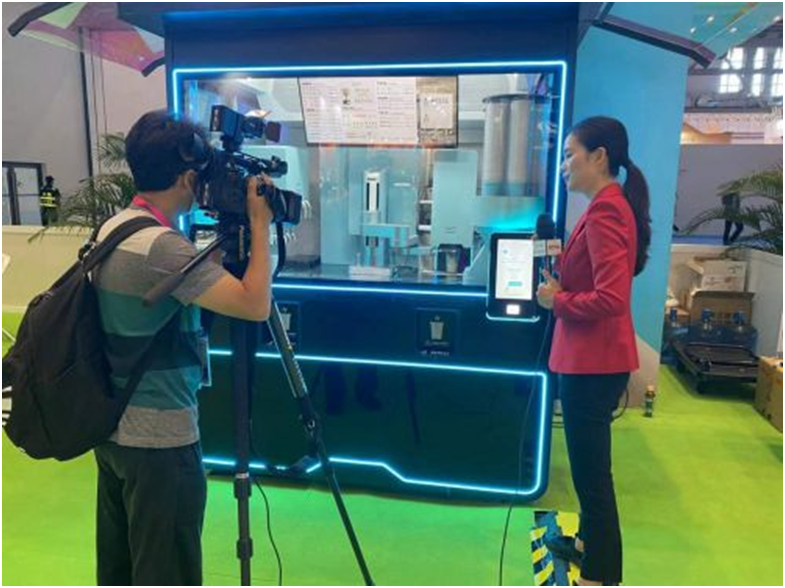